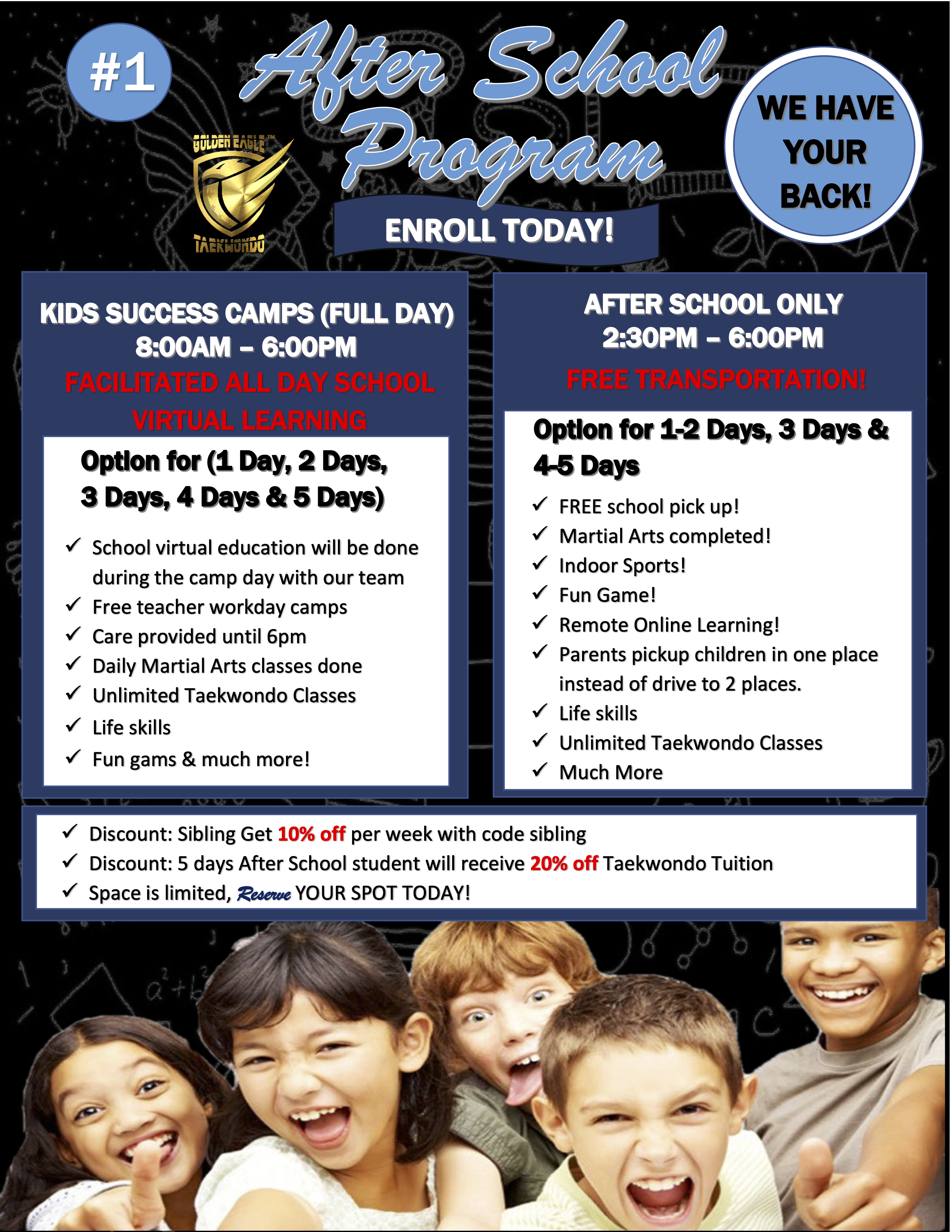 Secure your spot and get started today with our EXCLUSIVE offer!

By opting into the web form above you are providing consent for Golden Eagle Taekwondo to send you periodic text messages. Standard rates may apply. You can reply HELP at anytime or learn more. You may opt-out anytime by replying STOP.

Is the best taekwondo school ever!!
Highly recommended!!
The Masters Hum, Kim and Chris are so amazing and professional, they teach us to conect our spirit-body & Brain in one. We as a Family all join the classes every day.
THANKS GOLDEN EAGLE TO BE PART OF OUR LIVES.

Passionate and knowledgeable! Would recommend to anyone interested in trying!

It’s a fun and safe place to learn TaeKwonDo and to learn lots of life’s lessons.

My kids love going to their lessons. Very passionate and caring Masters, as well as everyone in the family. I'm so glad we are part of your program. Highly recommended!

My 4.5 yr old son is learning focus and discipline. To see him smile in class and learn from the instructors warms my heart. The Instructors are firm, but positive and inspirational to the students. I encourage everyone who may have an interest to try it out.

First class last week. I'm 43 and pretty out of shape. That said, the instructors have been patient, attentive and aware of my modest abilities. Thoroughly enjoying it so far, expect to enjoy it more as I get fitter.

I've seen a huge improvement in my boy’s confidence and as well as discipline. Great facility and great staff.

Master Aaron Um is a 5th Degree Black Belt in Taekwondo (World Taekwondo Federation Kukkiwon), is at the Master Instructor level, and is recognized by the International Federation

Started teaching TKD at 18 at Alcala de Henares in Madrid

Master Um came to the United States to train and participated in the Senior National Championship and the U.S. Open Taekwondo Championship where he received gold medals

In 2006, he opened Golden Dragon TKD Academy in Tulsa, Oklahoma which is the biggest TKD school in the state

In 2008, Master Um and his family moved to Texas where he experienced life-altering experiences which led him to become a born-again Christian, finding his true purpose in life.

Continuing his passion for TKD, he opened the Golden Eagle Taekwondo School in Katy, Texas, dedicating his time to providing the best mental and physical training possible

He is married with three children

Favorite Bible verse: “But those who hope in the Lord will renew their strength. They will soar on wings like eagles; they will run and not grow weary, they will walk and not be faint.” – Isaiah 40:31

Be Humble, be Kind and Respect others, but always be ready to protect others and yourself.

Do your best and let God the rest.

Character is more important than talent.

You don’t drown by falling in the water; you drown by staying there.

Having a passion for Taekwondo, she joined Golden Eagle TKD to support and create future champions

1st Place at the CONADEIP 2013 in Cuernavaca, Morelos. (Female team).

1st Place at the CONADEIP 2014 in Monterrey, Nuevo León. (Individual).

Over 20 years of  experience.